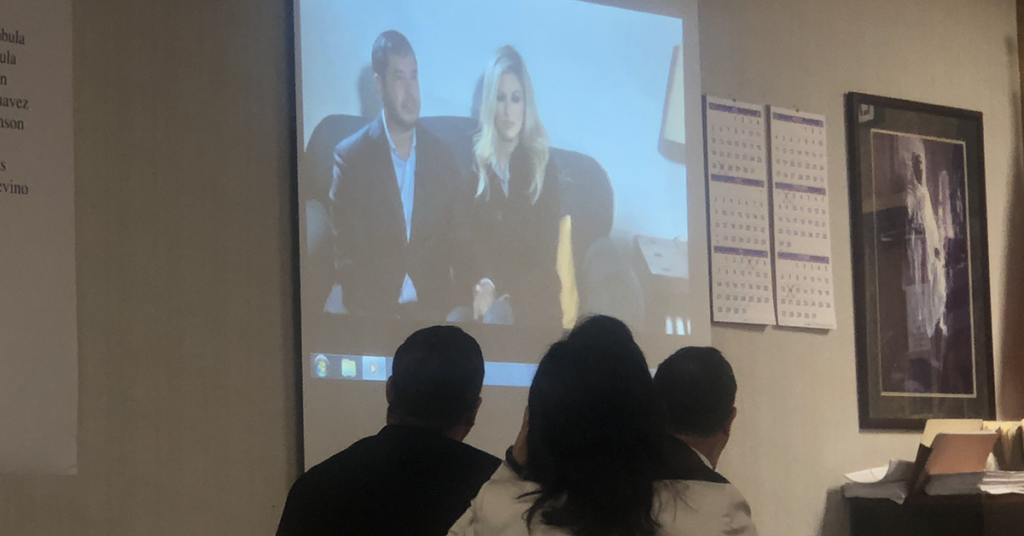 It was one of the infamous televised interviews Arambula and his wife, Elizabeth, undertook two days after Arambula was arrested on suspicion of child cruelty.

Arambula and the jury sat quietly as the legislator’s interview with former KSEE 24 anchor Evan Onstot was screened in the courtroom.

During the interview, Arambula claimed his innocence.

“I had a daughter who was acting out, and I disciplined her,” Arambula said to Onstot. “I’m embarrassed to say – it’s not something we routinely do, but I did spank her on her bottom.”

During the interview, Arambula noted that he wasn’t sure what “precipitated all of this” in regards to an injury to his seven-year-old daughter.

Following the screening of the KSEE24 interview, Wright rested his case-in-chief. Arambula defense attorney Michael Aed immediately made a motion to dismiss the case, citing inconsistencies and insufficient evidence for a jury to convict.

Judge Alvin Harrell III denied Aed’s motion, saying that based on the prosecution’s evidence a jury had sufficient evidence to convict. He added that the inconsistencies raised were outweighed by the gravamen of evidence presented.

Through five days of testimony, the District Attorney has brought forward 10 witnesses – including two of Arambula’s daughters – to testify about how his eldest daughter received a bruise to the right side of her face near her temple and the various actions taken before the legislator was arrested.

Ultimately, jurors began to see a clearer, coherent picture of Arambula’s defense and a fleshed out prosecutorial case to convict him.

Before airing the television interview to the jury on Thursday, Fresno Police Officer Stephen Phebus testified about his investigation at Dailey Elementary on Dec. 10. Phebus was the primary officer on-scene at the time.

Leading up to his testimony, Phebus has been a source of criticism for defense attorneys Margarita Martinez-Baly and Aed while examining other adult witnesses.

Among their qualms were the claims that Phebus was overly loud – possibly divulging confidential information in the school’s front office – and rude and aggressive to Child Protective Services staff on-scene.

He, like nearly all law enforcement personnel who testified, faced questions of procedural thoroughness during his investigation and how it handled Arambula compared similar cases.

While cross-examining Phebus – and and Detective Kenneth Dodd, the chief investigating officer earlier this week – Aed worked to determine the involvement of superior officers at the Fresno Police Department to discern if the case veered off from a conventional misdemeanor investigation.

Meanwhile, Aed and Martinez-Baly focused on the fact that Phebus failed to use a body-worn camera while engaging in interviews on campus, despite Fresno Police policy advising officers to refrain from recording children under 12 years of age.

As has become custom with the male law enforcement witnesses in the Arambula case, Aed handled cross-examination – poking, prodding, and delivering rapid fire inquiries to Phebus about who he did and did not interview during his investigation.

During his testimony, Phebus told jurors that following his interview with the victim and reviewing evidence at the elementary school, he alone made the decision to arrest Arambula.

Arambula was not handcuffed, but was placed in a holding cell at Fresno Police headquarters, Phebus testified.

Since last Friday’s opening statements, Arambula’s team honed in on a three-pronged defense: expounding inconsistencies from the victim and those corroborating her claims, scrutinize the details of the police investigation, and paint a picture of a good, if imperfect, family life.

What element of the defense was being used largely depended on the prosecution’s witness.

While attorneys on both sides of the case had to tread lightly with a vivacious, intelligent seven-year-old victim, Martinez-Baly worked to unravel the child’s inconsistencies in the story by drilling adult witnesses who interacted with her.

There was, however, a constant throughout the Wright’s case. An allegation that Amy Arambula, the victim’s grandmother, coached the seven-year-old to focus on the positive things her father did for her, rather than the negative was ever-present.

That allegation was regularly used explain why the victim’s story changed between what she told school staff, Child Protective Services, and police officers on Dec. 10 and what she told an independent forensic interviewer on Dec. 11.

“What I said was a little bit different than this because I was scared of what might happen and I didn’t know what would happen,” the victim told the forensic interviewer shortly after altering her story.

She later added the fact that Amy Arambula told her to focus on Arambula’s positives.

The victim and her two sisters were placed by Child Protective Services with Amy and former Asm. Juan Arambula (D-Fresno) following Arambula’s arrest. It was during this stay that Wright argues the victim was coached.

In delving into the actions of various officers, Aed worked to portray the police investigation as simultaneously overzealous, due to Arambula’s name and position, and cursory.

Similarly, Wright keenly kept his own case in focus.

Acknowledging in his opening statement that jurors were likely to see inconsistencies from the victim herself, Wright focused on buttressing her testimony with corroborating statements from adults she interacted with at Dailey Elementary

With the introduction of the television interview, Wright managed to preview a line of attack when the defense starts its case: that Arambula’s credibility is far worse than the minor inconsistencies raised by the defense.

Oddly missing from Wright’s case was testimony from Dr. Michael Allshouse, the medical director of pediatric surgery and pediatric trauma at Valley Children’s Hospital in Madera.

Allshouse underwent an evidentiary hearing just before trial commenced to determine if he’d be able to testify to the extent of trauma sustained by the seven-year-old victim.

Allshouse could serve as a rebuttal witness after the Arambula rests his case.

Arambula is opening his case-in-chief on Friday morning. During opening statements, his attorneys indicated that he would testify in his own defense.

Other potential witnesses include his wife, brother-in-law, and a local psychologist.