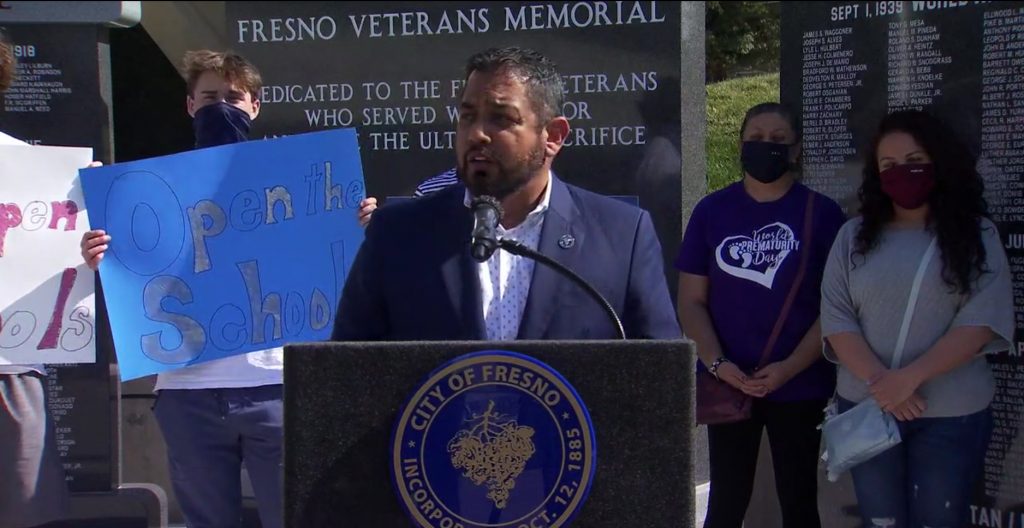 Fresno City Councilman Miguel Arias, whose two children are enrolled in Fresno Unified schools, added his voice to the growing chorus of parents and others who say it’s time for the district to reopen campuses to in-person instruction.

Now that the economy has opened up, truancy and absentee rates among Fresno Unified students have skyrocketed because parents are back at their jobs and no longer acting as an at-home teachers aide, he said.

Parents who are having to leave their children home alone while they go to work are afraid to speak out for fear of being the target of prosecution, he said, adding that he is speaking out on behalf of those parents.

Fresno Unified has the resources and expertise to move the district safely back to in-person instruction, Arias said at a Friday press conference in front of City Hall.

“It is time for the district to respond to the pleas of parents and students and to offer realistic options for those students who have been neglected for more than a year. In-person instruction directly from a teacher … is invaluable and essential to their learning.”

Under Fresno Unified’s current labor agreement with the Fresno Teachers Association, teachers are not required to return for in-person instruction until Fresno County reaches the orange tier on the state’s reopening plans, signifying that the risk of coronavirus infection is moderate.

While infection rates and case rates continue to decline in Fresno County, the county remains in the purple tier, denoting widespread risk of infection.

When asked whether the teachers union is seeking a bigger paycheck to return to the classroom, Fresno Unified spokeswoman Nikki Henry said she couldn’t discuss details of the district’s proposed contract revisions. But she confirmed that the district and union have been in “constant” contact during the pandemic, “even more so since we’ve gotten confirmation on additional access to vaccines and widespread testing for our district.”

She said the district is somewhat mystified why Arias, who last week rejected a proposal by fellow Councilman Garry Bredefeld calling for the city to file a lawsuit to force Fresno Unified to reopen, would hold a news conference instead of communicating directly with district officials.

Arias said that over the past two weeks he had, in fact, been in contact with most district trustees, Nelson, and parents, and closely studied the district’s reopening plan as well as the labor agreement amendment that Nelson and Bonilla signed in January.

It was clear from reading the reopening plan, Arias said, that it was drawn up for the benefit of teachers, not parents.