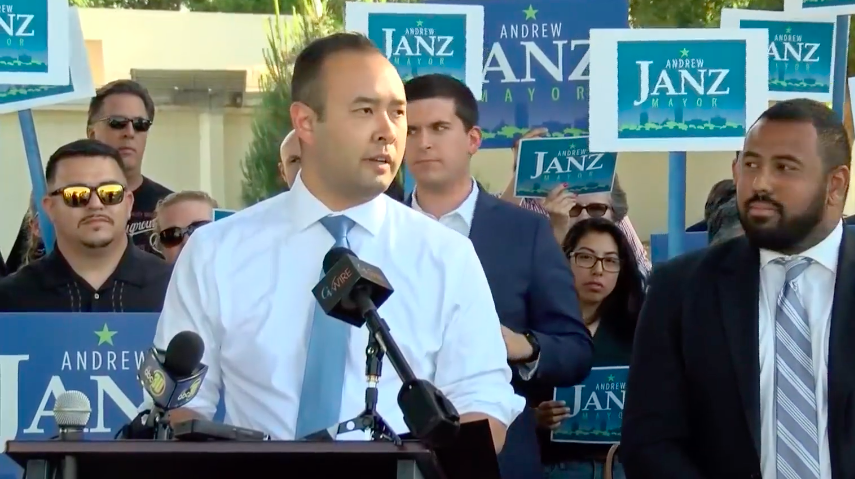 With a backdrop of supporters, including Fresno City Councilman Nelson Esparza, Janz spent much of his announcement working to draw a sharp contrast with incumbent Fresno Mayor Lee Brand.

Janz cited the location of his announcement as indicative of failures by Brand.

“I purposefully chose this location because I think that this park perfectly symbolizes the failures of the Lee Brand administration,” Janz said opening his announcement.

The prosecutor’s candidacy went public Monday after his candidacy filings were first discovered by The Sun.

Since then, Brand and Janz have drawn battle lines over who has the requisite experience to be Mayor. Brand asserted that Janz had no track record other than spending much of 2018 arguing that he was “not Devin Nunes,” while the first-term Mayor had a strong resume.

“I think my 40 years of successful business experience, eight years on the Council and the past two years and four months as the full-time Mayor of Fresno speak for themselves,” Brand told The Sun. “I’ve helped bring over 5,000 good-paying new jobs with benefits to the community and crime continues to drop in the City.”

In his announcement, Janz pushed back at the notion that he was too inexperienced to lead.

“Lee Brand thinks that I need to run for school board, dog catcher, or all of these other positions first before I can run to be the Chief Executive of this office,” Janz said.

The prosecutor spent much of the past week slowly treading into issues, setting the table for his campaign on three baseline issues: homelessness, public safety, and parks development.

The last of those three is a cornerstone issue for a coalition that largely helped recruit him into the race: the backers of Measure P, the failed 2018 sales tax measure to fund park improvements over a 30-year period.

Sources told The Sun that much of the first quarter of 2019 was spent by Yes on P allies, including associates of former Mayor Ashley Swearengin, working to recruit Janz to challenge Brand.

Janz ultimately met with Swearengin herself, but she said she would not be engaging in local political activity beyond that of the Central Valley Community Foundation, of which she is the Chief Executive Officer.

The Foundation was a primary sponsor of Measure P and Swearengin a high-profile surrogate.

Additionally, Janz attempted to leverage public safety into a means to turn Brand’s experience argument around, pushing for a suspension of the search for a Police Chief successor to Jerry Dyer.

The candidate told The Fresno Bee that Brand should suspend the search and appoint Deputy Chief Pat Farmer as interim chief when Dyer reaches retirement in October.

The move would leave Farmer as an interim Chief from anywhere between 15 and 24 months.

“Selecting Fresno’s next Police Chief was a big issue in the 2016 campaign and the voters chose me to make that decision because I told them I would conduct a national search in an open, transparent process,” Brand said. “I am fulfilling and exceeding that promise.”

While Janz made his announcement on Thursday night, Brand hosted the third of five public meetings to solicit comment about the Police Chief search at Gaston Middle School in southwest Fresno.

Following the announcement event, Janz declined to delve into policy specifics with reporters, saying his campaign would be releasing detailed policy statements on the issues in the coming months.

Said Brand after the announcement: “I am confident that the voters will make the right decision and choose proven results over empty soundbites.”

While squaring off against Nunes last year, Janz faced allegations of campaigning while on public time at the Fresno County District Attorney’s Office. The department denied those allegations.

Prior to Thursday’s announcement event, The Sun reached out to the Fresno County District Attorney’s Office for comment regarding Janz’s candidacy and office procedure as its second-best-known official launches another highly visible political campaign.

The District Attorney’s Office declined to make a statement until the announcement was official. The Sun has made a supplemental request for comment.