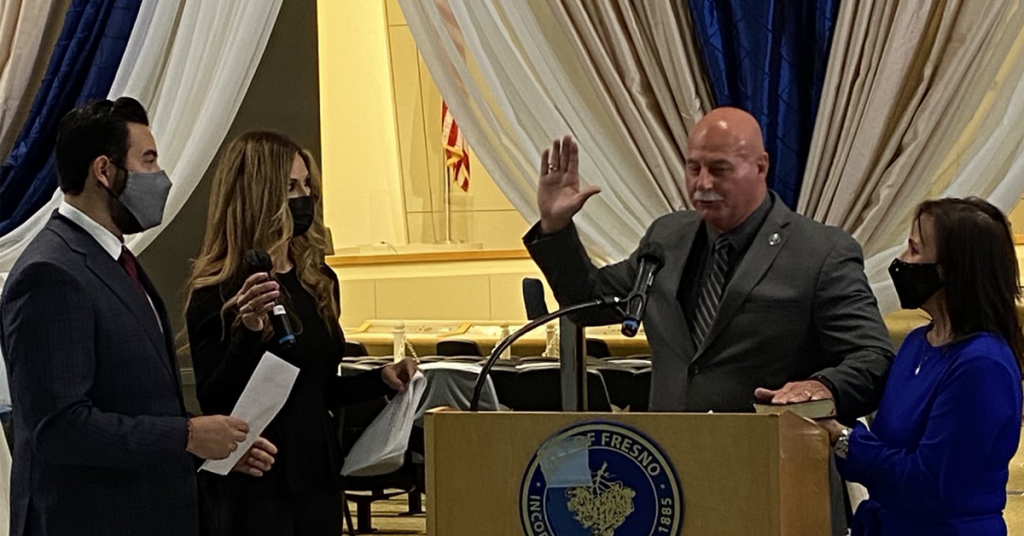 The pair of elected officials, along with returning Council members Garry Bredefeld and Mike Karbassi, took their official oaths on Tuesday at a private ceremony.

Dyer was given his ceremonial oath by his two children – Jeremy Dyer and Janelle Hastings.

Caprioglio has been a staple at City Hall over an eight-year span, first stepping in on an interim basis when then-Fresno City Council member Larry Westerlund was activated for military service in 2008.

He was elected in his own right in 2012 and served from 2013 through Tuesday.

Closing out Thursday’s ceremonies, outgoing Fresno Mayor Lee Brand issued his farewell speech underscoring his rise from rugged roots in southeast Fresno to serving as chief executive of his hometown.

“We are forever bound by our covenant of public service,” Brand said of Fresno’s elected officials.

“2020 has been the year from hell – starting with a 100-year pandemic, economic devastation, racial reckoning, and brownouts.”

That economic overhaul extended into his mayorship, building a $35 million reserve ahead of the coronavirus pandemic.

Yet, for Brand the lowkey (or, in his words, “low volume”) leadership style was the key to the lifelong shift from a rough-and-tumble upbringing to running the city.

“A part of me will always be on MacKenzie Street,” he said, referring to his childhood home in southeast Fresno.