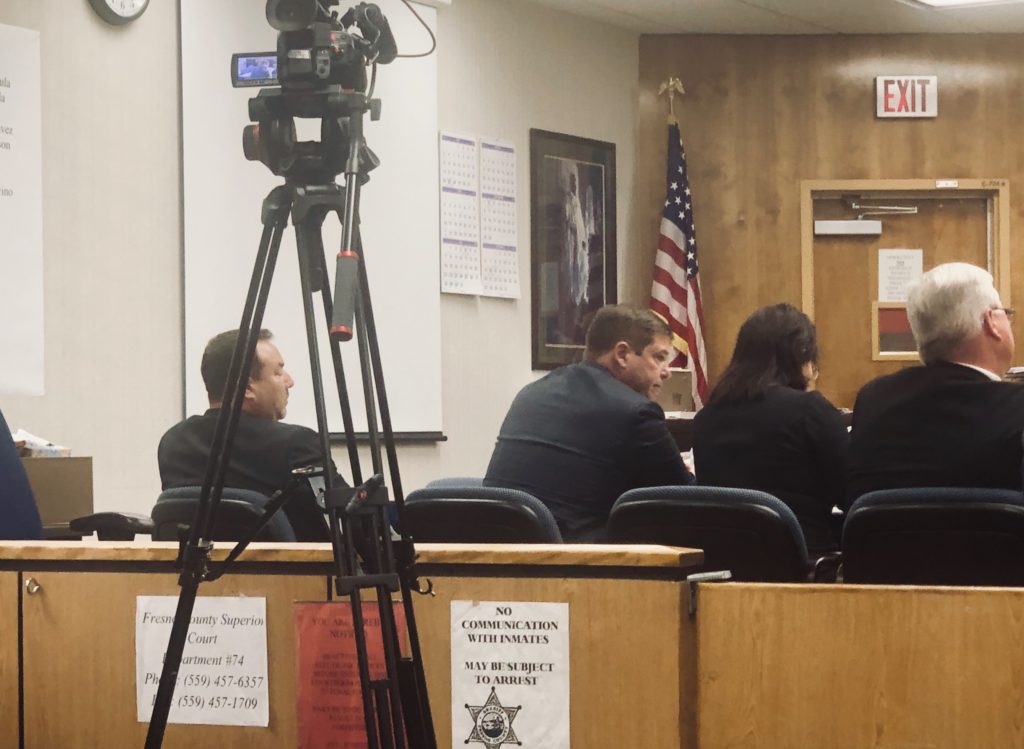 The first witness in Arambula’s high-dramatic trial would soon testify to details of the incident that occurred on December 9, 2018 that left her with a bruise on the right side of her face.

During her testimony, the child would testify that her father would squeeze her to the point that she struggled to breathe.

More importantly, the victim attempted to soften her description of what caused the bruise – from a “slap” to a “grasp” – saying she didn’t know the definition of the latter word at the time.

“What this case boils down to is on December 9, the defendant got so upset, so angry, so mad that he squeezed his 7-year-old and smacked her upside the head,” Wright said in his opening statement.

The opening statements of both Wright and Arambula attorney Margarita Martinez-Baly jockeyed around the testimony of the seven-year-old.

Wright cautioned the jury that it could not expect the victim’s testimony to exactly match the statements made five months ago, adding that there was potential her testimony could have been tainted due to witness coaching.

However, Wright also launched an offensive in the credibility battle by describing the high-profile television interviews Arambula conducted on December 12 as “self-serving.”

During those interviews, Arambula claimed he merely spanked his daughter on the bottom. Pictures of the child’s face, however, vary greatly from that account.

“He flat out lied to the interviewer, and he lied to everyone watching that interview,” Wright said.

In previewing the defense, Martinez-Baly reiterated that Arambula only spanked his daughter twice on the bottom.

The attorney also sought to discredit the legislator’s eldest child early, claiming that she was exceptionally bright and had “an answer for everything.” Martinez-Baly added that the seven-year-old had a craving for attention from her parents.

The defense also previewed another line of attack – that law enforcement conducted an insufficiently cursory investigation and was overzealous due to Arambula’s position.

In reference to Arambula himself, Martinez-Baly also laid the groundwork related to his character, saying “[h]e’s not a perfect father and I don’t think anyone is a perfect parent.”

The precocious seven-year-old, bunny in tow, took the stand and provided a moment-by-moment recounting of the incident on the evening of December 9.

According to her, the incident began as she and her six-year-old sister were preparing for bed.

The victim said she was throwing her sister’s toys across their shared bedroom when her sister got upset and began to cry. Arambula entered the room upset. The victim described him as red-in-the-face with closed fists at his sides.

By then, the victim was jumping back-and-forth between the two twin beds in the room. She said Arambula pinned her to one of the beds, squeezed her face to the point she struggled to breathe.

The daughter struggled to emerge from the Assemblyman’s pin and, during that moment, Arambula struck her in the face twice. His ring eventually left a one-inch bruise on the right side of her temple.

The daughter testified that following the incident, she could not sleep on her right side of her face out of pain from being struck there.

During direct examination by Wright, the victim’s testimony became hazier as events turned from what happened on December 9 to what happened the following day, when she reportedly told staff at Dailey Elementary School about the injury.

When asked about how she reported her injuries and what she said, the victim regularly stated she could not remember.

This prompted Wright to have to occasionally lead the witness – a move approved by Judge Harrell during pre-trial motions – by reconfirming statements the victim made to law enforcement officers and social workers.

Ever-present during Wright’s opening statement and questioning of the victim were allegations that the seven-year-old had been coached to downplay or recant the incident.

The allegations stem from answers the youngster gave Department of Social Services interviewers in December, telling them that her grandmother – Amy Arambula – told her to only emphasize the positives of her father.

On the stand Friday, the child reiterated the fact that, while the Arambula children were placed with their grandparents by the Department of Social Services, Amy Arambula told the victim to emphasize the positives of her father and downplay negatives during interviews.

Wright, in his opening statement, said the decision by Social Services to play the children with their grandparents was “a mistake.”

However, Wright said that the push to influence the child by family began as soon as Elizabeth Arambula, the legislator’s wife, arrived at Dailey Elementary School and began to ask her daughter what she told investigators.

As Martinez-Baly began cross examination of the seven-year-old, the victim provided uncannily precise detail about a book she read roughly around the same time as the incident.

The trial resumes at 2 p.m. on Monday.