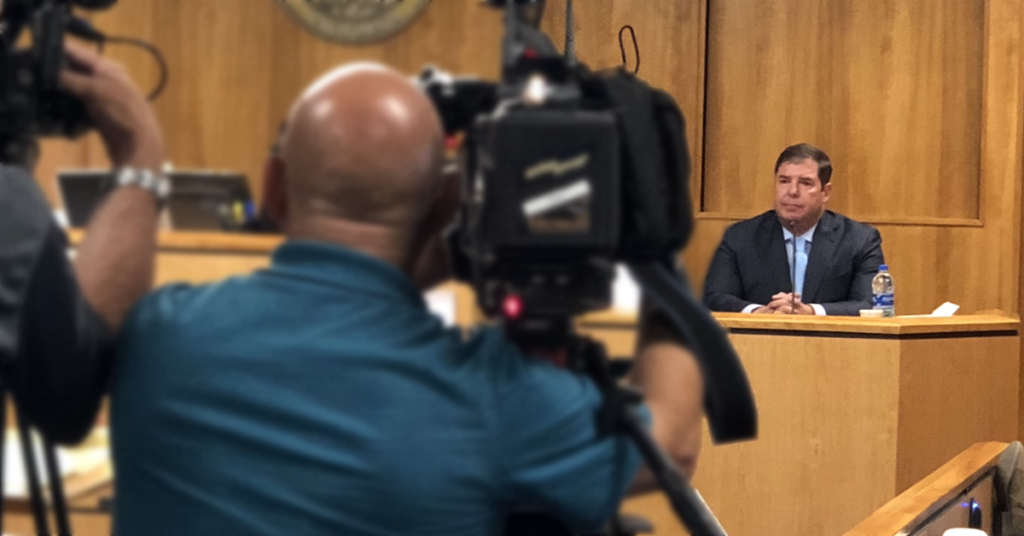 After eight days of testimony and countless witnesses, Asm. Joaquin Arambula (D-Fresno) issued his first words since a round of televised interviews on Dec. 12 to detail the incident that placed him in a courtroom on the seventh floor of the Fresno County Superior Court.

Eventually, Arambula would contradict those statements.

“For the first time in my life, I grabbed my daughter and I spanked her, twice on her bottom,” Arambula told the jury Tuesday morning.

Five months ago, amid a round-robin of interviews, Arambula told KSEE 24’s Evan Onstot that spanking his children was a last resort he and his wife, Elizabeth, had used previously.

“It’s not something we routinely do, but I did spank her on her bottom,” Arambula told Onstot.

He added, later: “It is a tool of last resort, it is not something we do – it is rarely something that we get to do. And yet it is a part of discipline that we have.”

Arambula reiterated repeatedly to the jury that he did not strike his daughter on her face on the evening of Dec. 9, but merely spanked her twice.

However, on Dec. 10 she reported to teachers and staff at Dailey Elementary School that she had an injury on her face after her father hit her.

Arambula testified that, when his daughter was acting out on Dec. 9, he wound up grabbing her arms and engaging in a near-bear hug to restrain her, then ultimately spanked her twice.

When asked by his attorney, Michael Aed, what occurred on the day of Dec. 10, Arambula detailed his morning agenda which, coincidentally, included a meeting with a staffer at the Fresno County District Attorney’s office.

While his wife, Elizabeth Arambula, previously testified that she had consulted with Joaquin about the alleged spanking prior to arriving at Dailey Elementary School in the afternoon, the legislator did not testify in similar fashion when asked by Aed.

Later, Arambula was asked by Aed about his interaction with law enforcement when he arrived at Dailey Elementary School and what they told him in relation to his daughter’s injury

“Law enforcement had a different version,” Arambula started amid an overruled objection. “It was not consistent with what I know me to be.”

He testified that, within minutes, he was under arrest and taken to be booked.

“For the first time in my life, I was placed behind bars. I was criminalized. I had my mugshot taken,” Arambula rattled off.

The Fresno Democrat was placed in a holding cell at Fresno Police Department headquarters.

As to the status of his daughters on Dec. 10, Arambula remarked: “They were taken by the government.”

Throughout his testimony, Arambula was working through his emotions, often adjusting his voice to fight back tears, or swinging into a mild temper.

Toward the end of his examination by Aed, Arambula had been admonished by Judge Alvin Harrell III after a number of non-responsive, editorializing answers to take a deep breath.

Assistant District Attorney Steve Wright worked to enlist some of that temper early in his cross examination of the defendant.

In his early questions, Wright posed the question: Is it possible for a spanking to cause a bruise to the side of the head?

Arambula, after a bit of hesitance, admitted that it was not.

Wright dug into Arambula’s gesturing and nodding while the victim, his seven-year-old daughter, testified. At the time, the defendant was admonished by Harrell for nodding his head while his daughter testified.

Wright wanted to know if it was a cue to his daughter, part of alleged witness coaching. Arambula denied it on the stand and struck back at Wright.

“I was trying to be present and support my daughter while she was on the stand after you subpoenaed her here,” he said from the stand.

Arambula testified that the program requirements became unnecessary and he took a leave of absence and never returned.

As Wright wrapped up his cross examination, he checked one last time to see if Arambula would admit to hitting his daughter.

“Absolutely not. I can’t say that more strongly,” Arambula replied.

As has ebbed and flowed during the course of the two-week trial, a large cadre of Arambula supporters attended to hear the second-term legislator testify in open court on Tuesday.

Among them was Fresno City Councilman Miguel Arias, simultaneously listening to testimony and editing paperwork related to a reform plan on motels in Fresno.

Both sides will deliver closing arguments on Wednesday and leave the jury – composed of six men and six women – to deliberate.