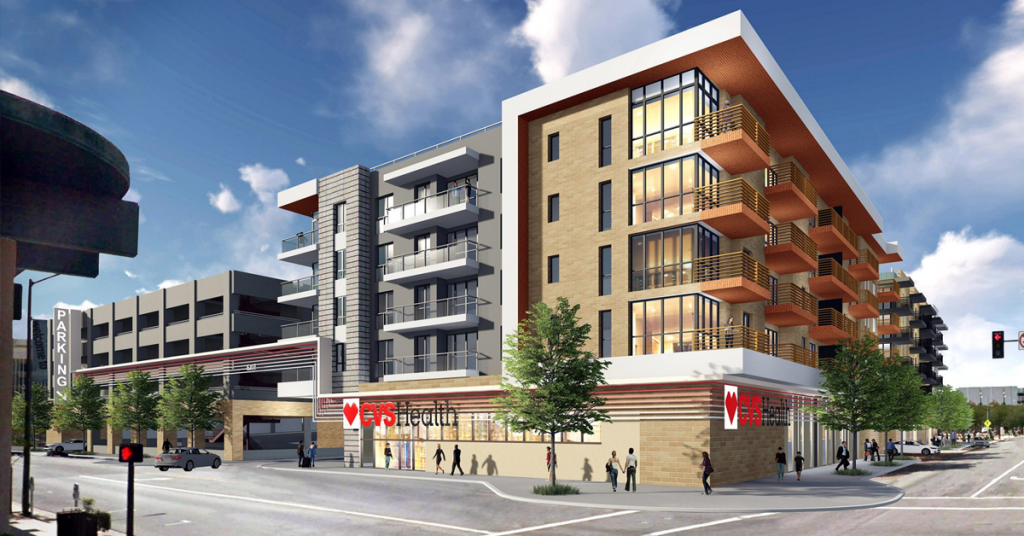 It appears that, finally, promises of a fully-developed downtown Fresno are about to come to fruition.

Before that happens, however, a familiar dance of government entanglement must conclude for two projects pitching to revamp the energy surrounding a downtown corridor stuck in a multi-decade doldrum.

Simply put: welcome to Fulton Street, a new battleground in Fresno’s land use.

The first project, pitched in 2014 by local developers Terrance Frazier and Mehmet Noyan, sought to purchase a set of land Fulton-facing land in the South Stadium neighborhood of Fulton Street.

Little is fully known about what the project would actually look like. Frazier and Noyan have proposed the project – dubbed “The Park” – would be a four-story mixed-use building featuring retail and affordable housing units.

What would it look like? It’s hard to tell.

The developers have only issued a singular artistic drawing of the property. In six years, no formal renderings or site plans have been released.

The developer duo managed to secure a development agreement with Fresno’s Redevelopment Successor Agency on its first phase construction in 2016.

At the time, the project cost was pegged at $14 million. Four years later, the pair announced construction costs rose to $18 million.

At the outset of that agreement, construction on The Park was set to begin on June 30, 2018. In April, the pair announced construction would commence last Friday.

In between the two construction dates, Frazier and Noyan announced there would be a $659,298 shortfall in funding and requested the City of Fresno cover the gap. On a 4-1 vote, the Fresno City Council granted the more than half-million-dollar request.

Meanwhile, Frazier and Noyan have committed roughly $50,000 in their own funds for the project, they said.

In August 2019, Frazier filed a claim for damages against the City of Fresno related to his nonprofit’s management of Granite Park.

Following Frazier’s claim, Fresno City Councilman Garry Bredefeld sought a re-vote on the appropriation of funds for The Park. It was denied.

Now, one day before shovels were scheduled to begin moving dirt, Frazier and Noyan appealed to the Fresno City Council for a lengthy, 10-month extension on their development agreement.

Delays to the project, the developers said, were tied to inability to readily secure state funding on the housing component of the project.

A Grand push on the north side of Fulton

Meanwhile, on the other end of Fulton Street, local developer Cliff Tutelian has been cooking up a fixer-upper of his own design.

Two years ago, Tutelian and the City of Fresno began exclusively negotiating for the rights to redevelop nearly an entire city block of Fulton Street between Tuolumne and Merced Streets.

What sits there currently? Downtown Fresno’s sole drug store – CVS Pharmacy – its open parking lot, and a frontage road made moot by conversion of Fulton Mall into a traversable street.

Since opening the negotiation window, Tutelian has commenced with design development drawings of a project that aims to modernize the woe-begotten pharmacy and eliminate the frontage road.

The project similarly seeks to deliver on the vision of live-work-play mixed use development evangelized by former Fresno Mayor Ashley Swearengin and the Fresno City Council with a design concept not out-of-place in California’s largest cities.

Along with the pharmacy, the ground-floor retail plans include a neighborhood market and additional retail spaces.

The project also redirects vehicle parking into a mid-block urban-friendly garage rather than a large frontage parking lot.

While the garage received some pushback – and a failed application for historic landmark status – over an obscured view of a five-year-old mural affixed to a neighboring building owned by Pacific Publishing (owner of Fresno’s The Business Journal), Tutelian announced his intention to add illumination to the garage to increase visibility of the mural.

As negotiations with the pharmacy giant were paused during the on-set of the coronavirus pandemic, Tutelian began working to secure financing in anticipation of successfully reaching a development agreement.

The developer has also begun engaging state officials to weigh the possibility of affordable senior citizen housing in the development.

Thursday, just before Noyan and Frazier were granted their 10-month extension on “The Park,” Tutelian sought a 90-day extension on his negotiations with CVS for Grand Fulton Square.

Fresno has laid plenty of ground – and money – on reviving Fulton Street.

With two high-profile, heavily scrutinized projects in the pipeline, only time will tell if local developers and lawmakers can turn the two most extreme points of the once-mighty main street into a reborn commercial and civic hub.