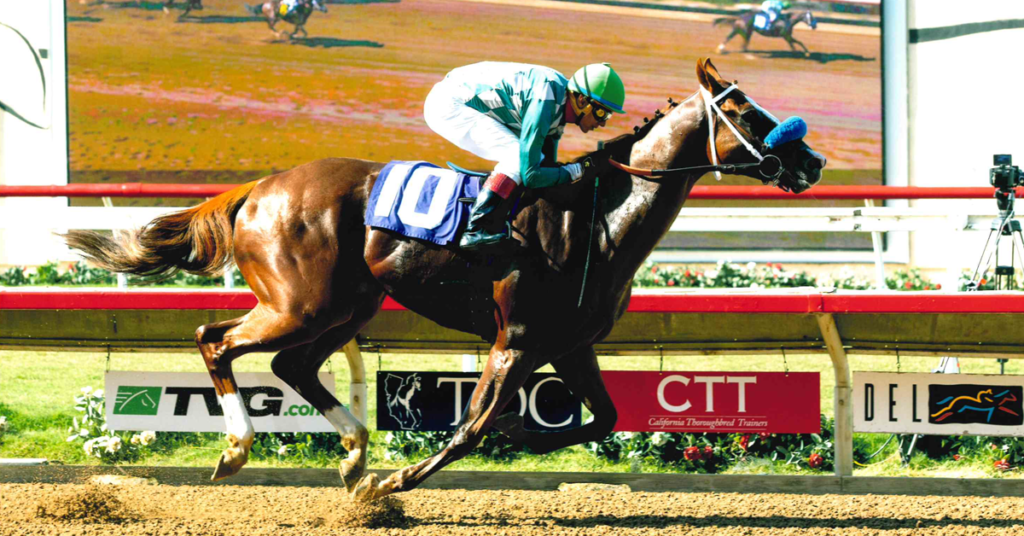 My grandparents lived in a stately home at 4240 Butler Ave., about two blocks west of the Fresno Fair.

Sadly, that neighborhood has lost its luster over time, but I will always hold it dear, as I treasure the idyllic times I enjoyed there as a young child.  When I was about 6 years old my grandfather, J. A. Harris, and I walked one warm Fall afternoon down to the Fair.

We looked around for a little bit at some of the attractions, but were soon drawn to old wooden grandstand which we climbed up to get a good view of the horse races.

My grandfather had grown up around horses, had a wonderful way with them, and always had a few at the Butler property to ride, including my black pony, Prince. As his only local grandson he adored me and I loved him.

He wasn’t into horse racing at all, and didn’t gamble, but had a terrific eye for a good horse.

I still recall how we sat there for several races and somehow picked several winners in a row just by how they walked and trotted in the post parade.  Although that was 70 years ago, I recall it all vividly.

I have been hooked on racing and the now the Big Fresno Fair ever since.

Horse racing combines so many things I like and am intrigued by— beauty, athletic ability, animal instincts, heritage, complexity, and for some of us a hard to explain bond between a regal animal and a person.

Uncertainty may not be considered by many to be a noble thing, but I love the unknown of which horse will prevail, at least at that moment in time.

For the few moments a race may take, that is your horse out there, even if you don’t own it.

We know we aren’t going to win as often as we lose, but the exhilaration of winning can magically erase the gloom of defeat.

Perhaps the greatest element of horse racing is the melting pot of fans that are drawn to the grandstand. The stands are filled with folks of every income, education, and ethnic background.

They are drawn to it because they love to predict which is the fastest horse and have a joyous time doing it.

And just before post time, people with seemingly little in common strike up a camaraderie when quizzing each other with one key question.

A chance to showcase local talent on the turf

I’m excited that my farm will have a chance this Friday and Saturday to show what we have, and I am flattered to be in a major race –  The Harris Farms Stakes – on Saturday.

I would starve to death as a tout, but that said, here are a few thoughts on some of the horses I have competing.

If your bankroll is still with a pulse, stay until 5:15 p.m. for the 9th race to wager just a bit on Reverend Al.

Reverend Al is a nice 5-year-old gelding we bred and still own. He is by Lucky Pulpit, the sire of California Chrome.

While he has already won two races and $55,115, he’s not exactly the same talent level as California Chrome, who won almost $16 million and is the  highest money earning California Bred ever.

The Reverend had a vacation on our Five Points area farm starting last October after making 18 starts with mixed success. We like to give our horses vacations and he appears to have liked his.

He was in training for a while at our farm with Per Antonsen, our on farm trainer since 1981. Antonsen came to the United States from Denmark and is a proud American citizen.

We decided to send him to the track with Debbie Winick a seasoned trainer, and one of the hardest working people l know. She was born into racing and never left. Amongst other things, she runs the Harris Farms horse office.

Reverend Al is named after the Reverend Al Wyrick, a Fresno minister with noteworthy success in television evangelism.

Wyrick pioneered the utilization of computers to keep in touch with his television and radio congregation, which were scattered all over the country.  He used direct mail in capturing their prayer requests, and giving them hope.

I don’t know if Reverend Al can win Friday, but he certainly has a prayer.

If you survive until dusk, take a hard look at a 3-year-old gelding we have in the 10th race at 6:15 p.m. named Changing Image.

Earlier this year I sold part of him to my fellow Westside farmer and longtime friend, Jimmy Anderson.

I feel badly Changing Image hasn’t been more of a star, but he did pick up a piece of  purse in 11 of his 12 starts. The winner’s circle, however, has been elusive.

I keep telling Jimmy that better times will come, but I hope he doesn’t give up on me or the horses.

Saturday will be a fun day for all Harris connections as we run Fashionably Fast in the $100,000 Harris Farms Stakes.

Fashionably Fast is quite possibly our best horse right now.

He won his last two starts, contentious sprints at Del Mar, and earned $185,000.  He ran a close second as the favorite in last year’s rendition of the Harris Farms Stakes.

He is training well and his regular jockey, the highly regarded native of Brazil, Tiago Pereira, flies up from Southern California to ride him.

Tiago, now 32, is one of the relatively new riders on in the California circuit, and is fast establishing himself as a top rider.

I do fear a few others in the race, including the undefeated Baja Sur, a son of Smiling Tiger who stands at Harris Farms and Tule Fog, a consistent sprinter who is a grandson of Soviet Problem, one of the fastest mares of her.

I would like to wish you all a wonderful time at the races. Like all of you, I am hoping I break even, because I need the money.

Best wishes to the Big Fresno Fair and thanks so much to all the staff and directors who put a tremendous effort into making it the best Fair in California.

Fair chief John Alkire has been a Godsend, and deserves all the praise he so ably earns.

John Harris
John C. Harris is the Chairman of Harris Farms, a leader in agriculture, hospitality, and thoroughbred breeding and training, located on the westside of the San Joaquin Valley.