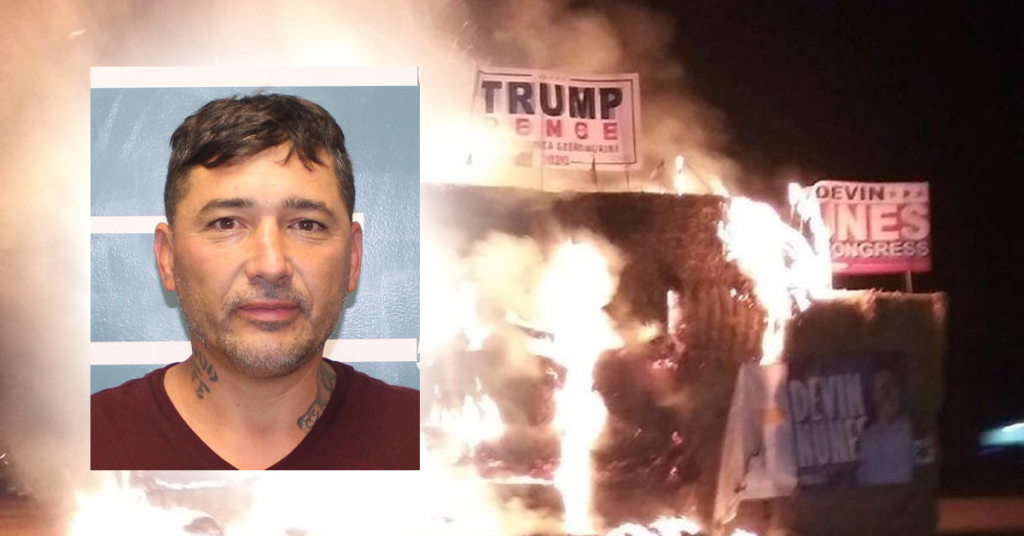 Tulare County prosecutors have charged a man allegedly responsible for torching political signs of President Donald Trump and Rep. Devin Nunes (R–Tulare) affixed to a haystack on a Dinuba farm.

Tulare County District Attorney Tim Ward announced that a charge of arson would be filed in connection with the fire lit on Oct. 10, the second of two fires set ablaze on a farm owned by farmer and livestock auctioneer Jon Dolieslager.

In a statement, prosecutors point to a lengthy criminal record owned by Aguilar, including four open cases for felony child abuse, violation of a court order, criminal threats, and felony evading.

Aguilar is charged with arson during a state of emergency, arson of property, vandalism causing more than $400 of damage, and contempt of court.  The charges are enhanced with the special allegation that the crimes were committed while on bail in two separate cases, Tulare County’s District Attorney announced.

He is currently on bail for the child abuse and criminal threats charges.

Aguilar also received his first strike under the Three Strikes system for a second-degree murder conviction in Nevada.

If convicted on all charges tied to the arson, Aguilar faces a 21-year sentence in state prison.

According to voter registration records, Aguilar is a registered Democrat.

“This type of conduct will not be tolerated,” Tulare County District Attorney Tim Ward said in a statement. “We are ardent supporters of free speech but as I have said before, when that speech becomes action and that action is illegal, the protections of the First Amendment are no longer sacrosanct.”