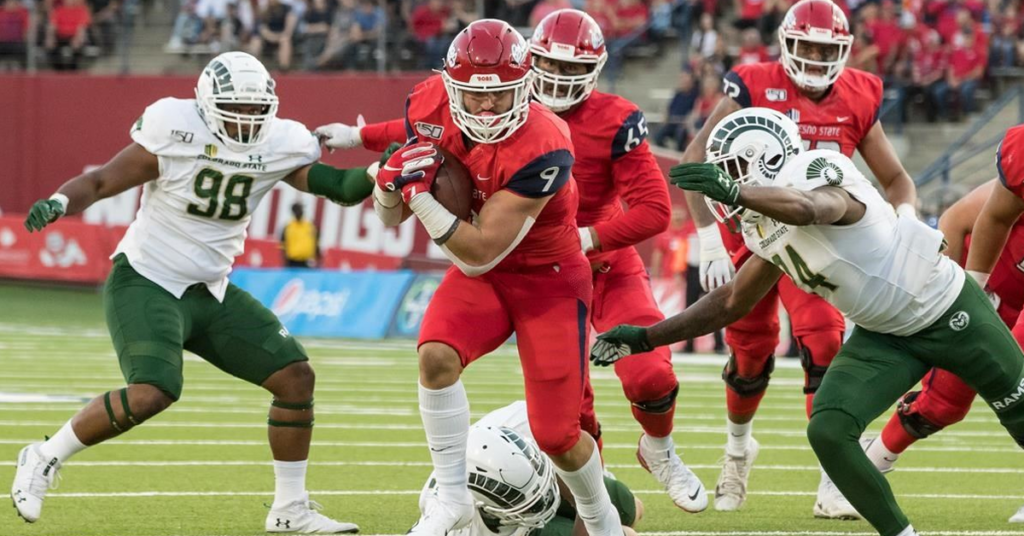 “Too many mistakes, penalties – they outplayed us, and we didn’t deserve to win the game,” Fresno State head coach Jeff Tedford said.

After the third quarter it looked like Fresno State was poised to win, but the offense couldn’t come through in crunch time.

Tied 31-31 with about five minutes remaining, the game initially turned in the Bulldogs’ favor. Colorado State faced a 3rd and 8 at the ‘Dogs’ 14-yard line. Quarterback Patrick O’Brien made one of his few mistakes all night and overthrew his target. Bulldogs’ strong safety Juju Hughes was waiting in the end zone to make the interception, halting a 15-play, 61-yard drive that took just over seven minutes – seemingly giving the Bulldogs the momentum.

But Fresno State’s offense couldn’t capitalize. Running back Ronnie Rivers didn’t’ get anywhere on 1st down, and quarterback Jorge Reyna couldn’t find wide receiver Jalen Cropper on 2nd, leaving the ‘Dogs with a 3rd and 10.

Reyna threw well past the 1st down marker to wide receiver Emoryie Edwards, who jumped up to make the catch while a Colorado State defender hit him. Unfortunately for the ‘Dogs, Edwards couldn’t securely grab the ball as it bounced off his hands and into the hands of Rams’ safety Logan Stewart, who returned it to the 13-yard line.

It was all downhill from there for Fresno State. O’Brien connected with wide receiver Warren Jackson in the end zone, putting the Rams up 38-31.

On the next Bulldogs’ possession they were able to get a first down but quickly faced 3rd and 3. The offensive line gave Reyna a clean pocket, but he wasn’t able to find a target immediately. He rolled out to his right and had a clear field in front of him to easily run for the 1st down, but he decided to try his luck through the air, targeting Derrion Grim deep down the sideline. Reyna missed out of bounds, bringing up 4th down.

The ‘Dogs had no other choice than to go for it. Reyna hit Edwards to the left, but the throw wasn’t past the 1st down line and the Rams forced the turnover on downs. To make matters worse, Edwards received a personal foul after the play, giving the Rams 15 free yards which put them in field goal position with just a few minutes left.

Colorado State made a field goal, and the Bulldogs didn’t have enough time to score twice, ending a disappointing night for Fresno State.

The offense was only 2 for 13 on third down – many of which were long yardage situations – stalling throughout the game and never fully grabbing the momentum.

“There’s little details that will definitely be learning opportunities for us when we’re only getting two yards deep on a route when we need three or four for a first down,” Tedford said. “Those are learning opportunities when you come up a little bit short like that. Just wasn’t good enough. We’ve got to get better with the detail and make sure we understand the down and distance and give ourselves a chance to convert.”

The Bulldogs struggled to guard Jackson all night. The Colorado State receiver finished with 9 receptions for 178 yards and the touchdown that broke the tie at the end. It was big play after big play for Jackson and the Rams.

Reyna finished with 200 yards and 2 interceptions – the last one was in garbage time at the very end of the game.

“I thought he made some good throws and then a couple were a little bit high,” Tedford said. “It was unfortunate – the last one when we had the ball and driving – the ball went off Emoryie’s hands. The ball was a little bit high there. He played hard. He kept competing, and you’ve got to give [the Rams] credit, they put a lot of pressure on the passer. They played a lot of tight coverage.

“You’ve got to separate, and you’ve got to be a pinpoint passer in those situations, and some were good. I think the 3rd down situation mainly had a lot to do with not being on schedule. When you stay in a lot of 3rd and longs, it’s going to be tough to convert. But the ones that are disappointing are the ones that are 3rd and 3, right in that range, where we come up a yard short because we don’t get deep enough on a route or whatever it may be.”

Running back Ronnie Rivers had his best game of the season – 149 rushing yards and 2 touchdowns. Backfield mate Josh Hokit also had 2 touchdowns. But success of the running game couldn’t make up for the other offensive deficiencies.

“We didn’t play well enough, too many mistakes, and we’ve got to clean things up,” Tedford said. “There’s lessons to be learned, as long as you go back to work and you learn from them and you keep working at it. The objective is to get better every week and learn from the mistakes that we make. That’s the message. Give the other team credit for how they played. We didn’t play well enough. I was proud that our team came back in the second half and put [ourselves] in position and was ahead going into the fourth quarter. We just didn’t finish it in the fourth quarter.”