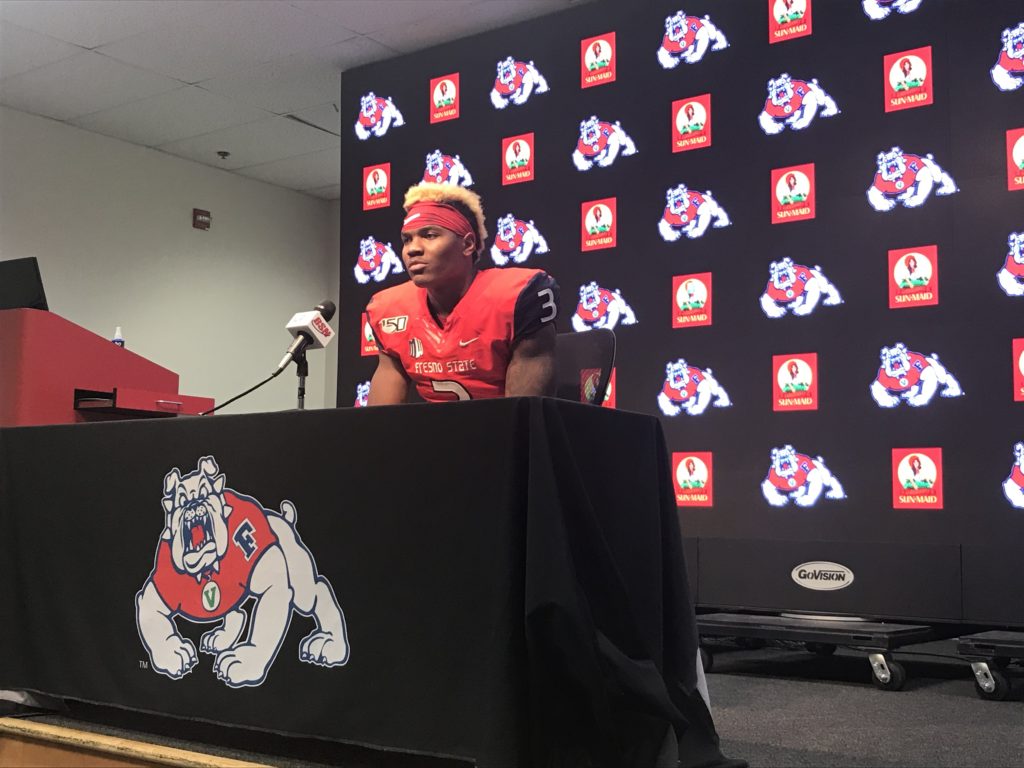 Last week the Bulldogs found a way to finish and won on a field goal as time expired. The roles were reversed this time around, however, as Utah State beat Fresno State 37-35.

“Very disappointing, obviously,” Fresno State head coach Jeff Tedford said. “To go down and come back in the second half and be able to take the lead and lose it at the end is always disappointing – just didn’t play well enough.”

Late in the fourth quarter it looked like the Bulldogs had it. They led 35-34 with a little over five minutes to play and came up with one of the most crucial defensive stops of the season.

The Aggies were set up with fourth and goal from the 1-yard line. Initially, they lined up to attempt a field goal, but after play was stopped to review the previous play, they sent the offense back out. Fresno State linebacker Arron Mosby broke through the line and drove back Utah State running back Jaylen Warren for a 4-yard loss.

“We were excited,” linebacker Mykal Walker said. “Personally, we thought it was over. That could be faulty on our end. We thought the game was over.”

But, unfortunately for the ‘Dogs, it wasn’t.

Fresno State took over with 5:19 left and a chance to run out the clock – a few first downs would’ve sealed it. But the Bulldogs promptly went three-and-out and were forced to punt.

Utah State took over possession at its own 47-yard line with just over 3 minutes to pick up the win. Behind quarterback Jordan Love, the Aggies drove downfield just like they did all night.

Utah State called a timeout with 2 seconds left to set up the 30-yard field goal attempt. Aggies’ kicker Dominik Eberle knocked it through the uprights to win the game.

“[Love’s] very accurate throwing the football,” Tedford said. “We got caught in a couple coverages that they got behind us with deep plays. They’re very efficient at what they do.”

Fresno State showed its youth with an uncharacteristically high number of penalties – 11 times for 108 yards.

Fresno State got off to a strong start on the back of its rushing attack, and while the ‘Dogs were consistent on offense, they simply couldn’t keep up with the Aggies.

Quarterback Jorge Reyna finished 16-20 for 263 yards, but he didn’t toss a touchdown.

“I thought Jorge competed his tail off tonight with his legs and manufacturing things and making throws,” Tedford said. “I thought he played really well.”

Running back Ronnie Rivers was the star of the night with his third-straight 100 yard rushing game. He finished with 102 yards and three touchdowns.

Freshman wide receiver once again delivered an electrifying performance – 87 receiving yards to go along with 17 rushing yards and a touchdown on the ground.

On defense, freshman Evan Williams made his second-consecutive start, this week at free safety. He led both teams with 9 tackles.

Fresno State drops to 4-5 with the loss, 2-3 in the Mountain West. The Bulldogs go on the road next week to play division-leading San Diego State.

“We do talk about the games you remember are the ones in November,” Tedford said. “We still control our own destiny. We have three teams in our division to play yet, so [we] can’t feel sorry for ourself, we’ve got to rebound. You’ve got to bring your A game each and every week to be successful, so we’ve got to go back to work. There’s no time to sit around and pout about it.”