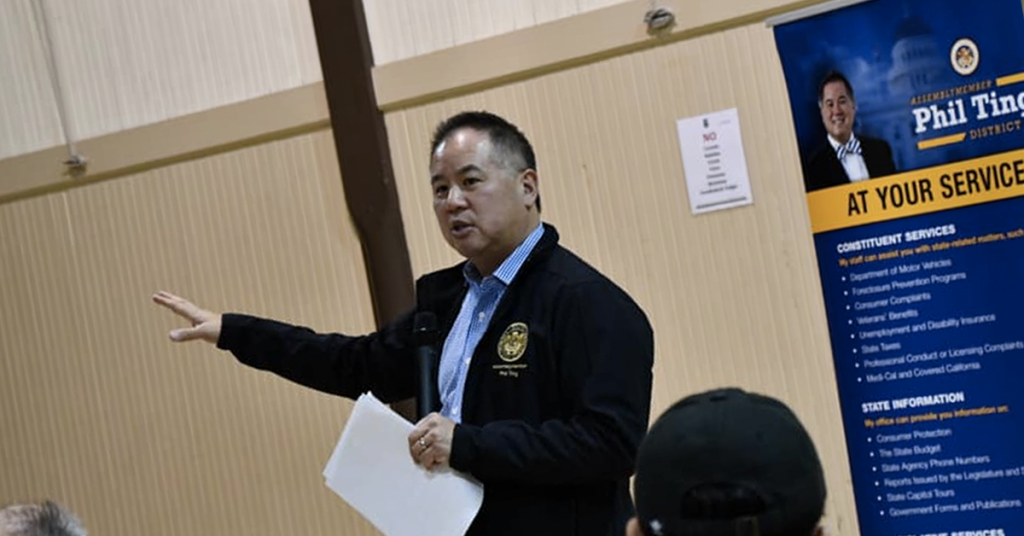 Reports of an extramarital affair by Asm. Phil Ting (D–San Francisco) has led to claims that Ting may have leveraged his relationship with a South African immigrant to influence legislation – including Assembly Bill 5, the state’s controversial freelancer law.

Ting – the former San Francisco County Assessor – referred to himself as Peter, a Sacramento-based consultant who spent considerable time on weekends in San Francisco, in correspondence with Foster.

Prior to their first meeting, Ting sent Foster a photo purporting to be himself.

Instead, it was a photo of Asm. Phillip Chen (R–Diamond Bar) attending a marathon.

Through much of their relationship, Foster was intermittently homeless and resided in motels.

“I’m staying at hotels and motels. He’s come to every hotel, everywhere I am he wants to know where I’m at,” Foster said. “He will come to these motels, hotels to sleep with me.”

Foster, in speaking with Communities Digital News, claimed that the California Labor Federation and National Domestic Workers Alliance used her as a prop to support Assembly Bill 5 – the law that codified marked changes to the Golden State’s rules governing independent contractors.

““These unions controlled my testimonies, got stories out of me, and then tossed me out,” Foster told CDN. “It was payday for them, not to help domestic workers.

“I sat next to Lorena Gonzalez to testify at her AB5 hearing on April 3, 2019, yet she never talked to me and refused to meet with me beforehand.”

Eventually, Foster’s stories would be supplied to left-leaning publications, including The New Republic, in support of the controversial law.

Foster further claimed that Ting arranged to have her work as a field organizer for Hillary Clinton’s 2016 campaign in Philadelphia.

Ting continued liaisons with Foster during this span while visiting the East Coast.

Subsequently, Foster returned to California and was – once again – provided a random offer for campaign work based in San Francisco in support of four statewide propositions.

It was on Election Night 2016 that she discovered Ting was a state legislator, as he celebrated the passage of San Francisco’s Measure RR on local television.

Saturday, following publication of the first CDN story, Ting publicly admitted to the affair but denied it influenced his legislative efforts.

by a relationship outside of my marriage. The allegation that my bills or votes were ever driven by any personal consideration is false. I have fought for the rights of working people my entire adult life.

I violated my family’s trust and I must now work, to the extent that I am able, to heal the wounds I have caused them and all of you. I will continue to do my best to represent my district and to work with my colleagues to address the many challenges facing our state.