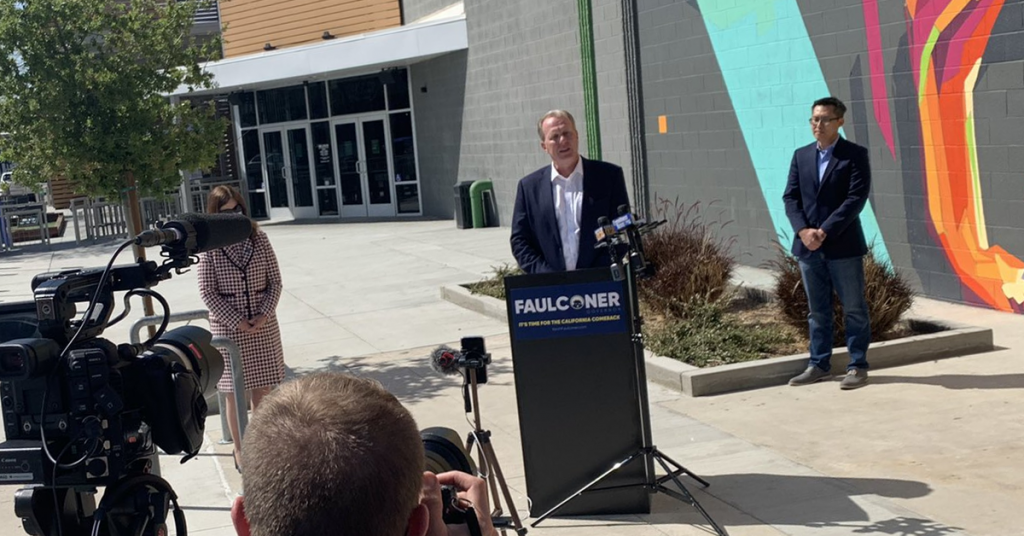 California gubernatorial candidate (and former San Diego Mayor) Kevin Faulconer swung through Kern County on Wednesday to launching an all-out assault on the pandemic failures of the state’s unemployment program.

The former San Diego mayor was joined by Asm. Vince Fong (R–Bakersfield) and Kern County District Attorney Cynthia Zimmer in the push to drive support for the recall of Gov. Gavin Newsom.

“There will be an election this year to replace Gavin Newsom,” Faulconer said. “This is an election to decide whether California stays stuck in the past with the same party, the same leaders, the same old ideas. Or we come together, we come together as Californians to embrace a new future. California is the most innovative and prosperous state in the nation, yet Californians are suffering from a broken state government that is robbing them of their livelihoods.”

Faulconer took aim at California’s Employment Development Department (EDD), which has faced widespread fraud and various other problems over the past year. The former mayor laid the blame for the department’s failures at Newsom’s feet.

“California has the highest unemployment rate in the continental United States, but Gavin Newsom’s administration has frozen, delayed or denied unemployment benefits for millions of Californians. That’s not fair, and it’s not right.”

The EDD was unable to handle the vast quantity of unemployment claims that have flooded the system since the start of the COVID-19 pandemic as people lost their jobs due to the state’s strict lockdowns.

While people have had issues claiming their unemployment benefits, fraudsters have been running rampant.

A state audit released in January revealed that severe mismanagement of the EDD led to at least $11 billion stolen by fraudsters, and the EDD admitted that the total might be over $30 billion.

“This is California under Gavin Newsom,” Faulconer said. “He talks about California values, but it’s just empty words. His pledges of fairness, equity and compassion – they’re a sham. His broken promises are breaking lives. As mayor of San Diego, I modernized our city government. We went mobile, and we went digital. But as a Sacramento politician for over a decade, Gavin Newsom has let the unemployment system crumble. And now it has become one of the biggest scandals in state history.”

Faulconer presented a three pronged approach to fixing the EDD.

First, Faulconer will place a moratorium on new legislation related to unemployment. His reasoning: California needs to fix what it has before adding anything new into the mix.

Second, he will make fixing the unemployment system the state’s top technological priority.

That consists of automating claims to speed up service, creating direct deposit payments, creating an online customer service portal “that actually works,” expanding call services hours to 24/7 during the pandemic crisis and utilizing existing fraud protections that other states use, such as cross checking inmate records.

Third, Faulconer said he will change the culture of the department. One way to do so will be to exempt new hires to the EDD from civil services departments in order to allow more flexible rules to bring in the needed workers to fix the EDD.