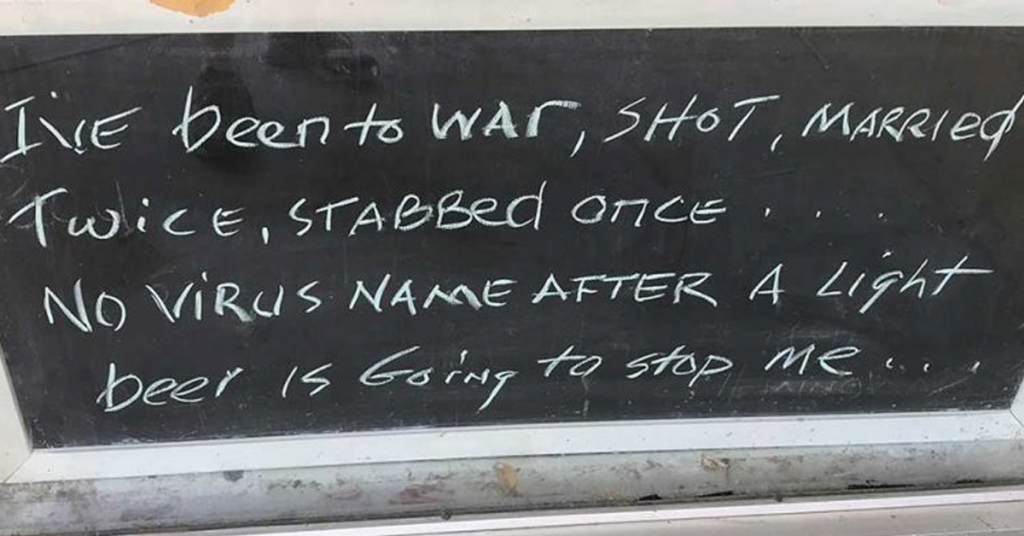 A Fresno businessman is voicing his displeasure with Gov. Gavin Newsom and the coronavirus pandemic-driven lockdowns through a unique medium: chalk signs.

Tim Ferrigan, the owner of Detention Billiards, was forced to close the doors of the Tower District pool hall and speakeasy bar for three months due to the pandemic.

After being able to reopen for three weeks, Ferrigan had to shut down operations once again to comply with Newsom’s current orders.

In response, Ferrigan has taken to posting chalk signs in the windows of his business.

“Humor. I’ve been putting up signs since I opened,” Ferrigan told GV Wire. “Apparently there’s some triggering happening with snowflakes, but that’s going to happen anyway. The stats just aren’t supporting it in my opinion, but what are you going to do?”

Ferrigan told GV Wire that he has lost about 25 percent of his annual revenue.

As far as the public’s reaction to the signs – both positive and negative – Ferrigan is rolling with it.

“I don’t even check Facebook,” Ferrigan told GV Wire. “I haven’t done it in years. Most people think the signs are funny, and they always have. I change them out every month or two. This is Detention Billiards, so this is like high school detention. The chalkboards? That’s where the idea came from.”

The phone number listed on the sign is for the National Suicide Prevention Lifeline.

Another sign reads: “Dear Governor… There is a ‘spike’ in Corona because there is a spike in testing. If we gave more IQ tests there’d be a spike in idiots too (If you’re an idiot I apologize grouping you in with Newsom).”

A third sign reads: “I’ve been to war, shot, married twice, stabbed once… No virus named after a light beer is going to stop me.”