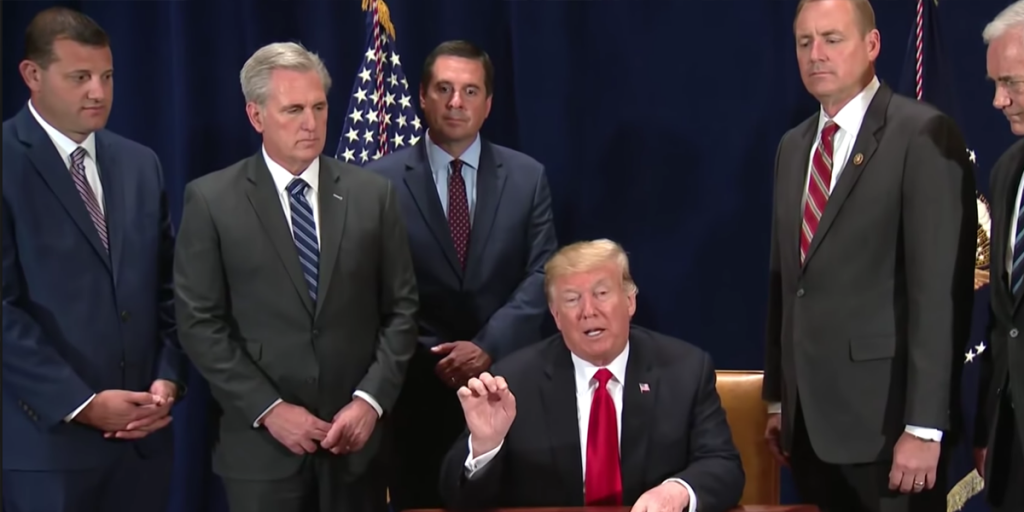 In just the past two years, we have witnessed the most concerted effort and an accompanying non-stop flow of actions by the Federal government that have contributed to a reliable water supply in the West than at any time in history dating back many decades.

Never before has a set of goals of this magnitude been set and met.

In Phoenix, Ariz. on October 19, 2018, President Donald Trump issued a memoranda titled, “Presidential Memorandum on Promoting the Reliable Supply and Delivery of Water in the West.”

This directive was sent to the Secretaries of Interior, Commerce, Energy, Army, and to the Chair of The Council on Environmental Quality.

After decades of uncoordinated, complicated, redundant, and radical regulation of water management, an effort was finally underway from the very top of the federal government to reduce flood risk, provide reliable water supplies to farms, families, businesses, and fish and wildlife; and to generate dependable hydropower.

The results of streamlining the regulatory process to support water delivery has resulted in the timely completion of required environmental reviews for major water projects, has advanced technology and investment, and has improved modeling and strategies using the latest and most updated science.

It is the first time that many federal agencies who can affect, or are obligated by regulation which can affect the delivery of water, to coordinate and collaborate in securing a process which seeks to keep the water flowing to sustainably support people, economies, fish and wildlife, and our environment.

“We have to make sure American farmers and their families, wherever they may be, wherever they go, have the infrastructure projects that they need to compete and grow,” Trump said in a statement that day.

For California, this meant that – within a very short period of time – the secretaries of Interior and Commerce had to designate one official to coordinate the agencies’ responsibilities as it related to two marquee environmental laws: the Endangered Species Act and National Environmental Protection Act for major water infrastructure projects where responsibility was shared.

This directive included the advancement of finalizing the cooperative agreement to operate the Central Valley Project and State Water Project and required updates to Delta Biological Opinions to incorporate within or make changes to include new scientific findings from over a decade of study, monitoring, and data.

In regards to water infrastructure in California, the federal agencies involved in the delivery of our water have sought to advance and complete projects that would change the future of water in California.

Projects such as raising Shasta Dam and fixing the Friant-Kern Canal will positively affect millions of people and acres of the best farmland in America. And those projects, in turn, will bolster our national security.

A couple of weeks shy of two years later, every directive listed in the Trump’s October 2018 Memorandum has been met.

In contrast to the current federal administration, the State of California has consistently sought to hinder any progress of additional water supplies to its own people.

Any loss of opportunity to California and its citizens because of an intended effort to avoid collaboration and cooperation with the feds would fall on deaf ears in Sacramento.

Our legislative majority and Gov. Gavin Newsom are blaming our state’s problems on a radical environmental religion where they hide from responsibility and accountability.

The State of California has managed to destroy its cities, valleys, and mountains, yet continue down the same path that got us here.

Our state leaders have filed lawsuits to stop the implementation of new biological and to halt studies of feasibility to raise Shasta Dam.  And they have decided to not support nor participate in fixing the Friant-Kern Canal.

“We need to evaluate, develop, and identify solutions and funding that provide water supply and conveyance for the entirety of the state, not one project at a time,” Newsom is noted with saying.

This reveals either complete ignorance of California’s water delivery system or a look into the future of the Governor’s intensions with your water.

Neither is good for us.

Much like the surrender to “climate change” while our mountains burn, the intended abandonment and blatant opposition to plentiful water supply will force land use changes, less choices, less freedoms, and incremental infringement of your property rights.

If we wait on Newsom to “evaluate, develop, and identify solutions and funding that provide water supply and conveyance for the entirety of the state,” we will have to immediately halt anything that contributes to our biggest export: taxpayers.

If his response in vetoing a bill to fix the Friant-Kern Canal is taken literally, which is the only way it should be taken, we are apparently going to embark on the largest and most expensive system of dams, canals, levies, power plants, and man-made lakes in the history of the world.

We know that will never happen. We can’t even raise a dam eighteen-feet let alone build water infrastructure that takes care of all of California.

This isn’t a case of “kicking the can down the road.”

This is a case of enormous ineptitude and extreme ideology.

The differences in ideas and attitude toward the success of our people could not be more different than they are today between the Federal and State administrations.