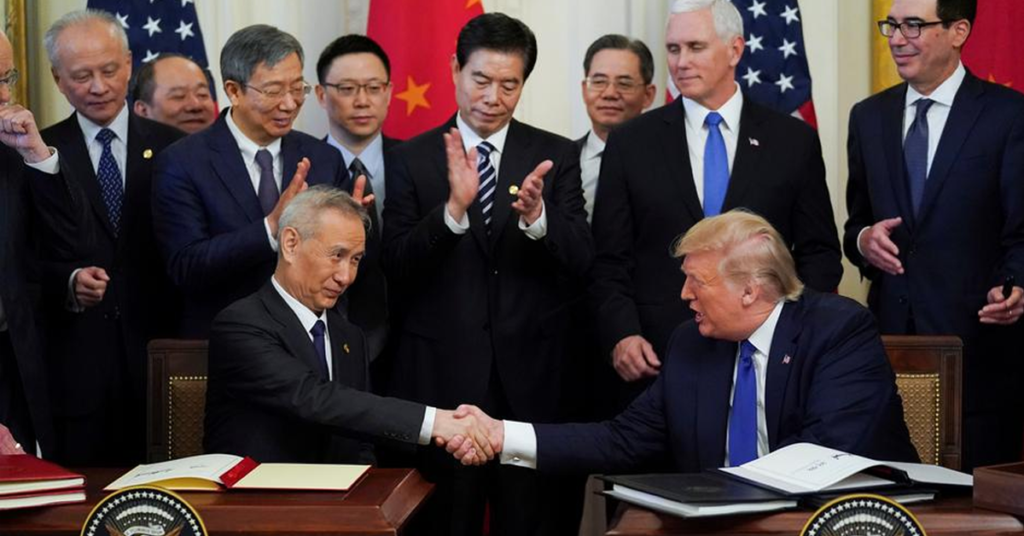 Five months after China announced it would no longer buy American agricultural products, a new trade deal has officially been reached.

“Phase One,” signed today by President Donald Trump and Chinese Vice Premier Liu He, will increase Chinese purchases of U.S. agricultural, manufacturing, and other goods by $200 billion over two years.

With the signing brings good news for both sides of the Pacific.

American agriculture will see purchases by China worth $40 to 50 billion for two years, almost doubling previous amounts before the decline, due to the negotiating process.

Moving forward, China’s commitment to the trade deal may remain in question, dominating the trade narrative.

Vice Premier Liu He previously stated that duties would have to be totally revoked in order to reach a deal.

That’s a marked change in stance, and a sign that China has made dramatic realizations that they are not negotiating with a weak Federal administration in Washington.

And even more importantly: had the United States not confronted China over trade, capitulation would have continued to the detriment of America’s economic and intellectual might.

With Phase One and USMCA in the quiver, it’s become eminently apparent that the majority of American producers and consumers are willing to endure a bumpy ride for the reward at the finish line.

For the first time in more than 30 years, we have the opportunity to tap China’s enormous buying potential on a level playing field.

The White House laid out the strong dispute resolution system, a key element of the first phase agreement that ensures effective implementation and enforcement.

The 25 percent tariff on $250 billion worth of Chinese goods put in place earlier will remain in place but could be completely removed in “phase two” trade negotiations.

Meanwhile, China’s threatened additional 25 percent tariff on the U.S. made automotive industry has been suspended.

Perhaps the greatest stumbling block to evaluating future phases of U.S.-China trade agreements won’t be the technical elements or structural implementation, but the hall of mirrors known as “the perception game.”

With various rounds of tariffs still active and enforced, naysayers may seize on the ongoing sacrifice of consumers.

Yet, the clear, early victory with Phase One has opened the path to securing additional phases that simultaneously ease the burden on American consumers and even the playing field for American producers.